Christine V. Davis
Director
-A +A 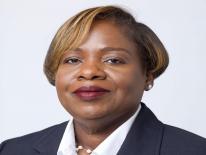 Director Davis is well-known within the DPW family after having served as the Department’s General Counsel since June 2001. She has served four Directors during her 20-year tenure, advising them on equal employment opportunity, personnel issues, labor laws, policy, legislation, ethics, Freedom of Information Act requests and administrative adjudication, among other matters.  Her superior legal skills led the Office of the Attorney General to designate her as a Senior Hearing Officer to hear its more complex matters and facilitate training for new attorneys.

Director Davis has been an integral part of DPW’s management team. She helped DPW move multiple initiatives forward, including, revamping the abandoned and junk vehicle removal process, establishing the Grounds Maintenance Unit, which is charged with mowing and maintenance of the District’s public spaces, and upgrading the District-owned fueling stations.

Director Davis is a native Washingtonian. She received her undergraduate degree from the University of Virginia and her Juris Doctor from Howard University School of Law.  She is a proud Cavalier and Bison.

Ms. Davis lives in Ward 7 with her teenage son, Benjamin.