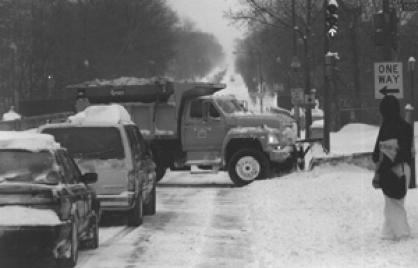 While the average annual snowfall in the District is 18 inches, it varies from season to season because the District straddles the snow/ice weatherline, making predictions less reliable. The city often faces storms that are not forecast or "under-forecast." Therefore, the District sometimes experiences ice, sleet, or freezing rain when snow is not specifically forecast.

Sleet and freezing rain are also hazardous. Although sleet usually bounces off of surfaces and does not stick to objects, it can accumulate like snow and cause hazardous driving conditions.

Rain that falls onto a surface with a temperature below freezing will freeze to the surface. This freezing rain can bring down trees, electrical wires, telephone poles and lines, and communication towers, and cannot be plowed.

Therefore, the city must continually evaluate the forecast based on historical data, conditions on the streets, and available capabilities.

When the forecast shows that "snow is coming," the District's snow drivers, fleet mechanics, and other snow personnel are put on standby while alerting the media. DPW provides a brief description of plans for a variety of weather conditions below.

During a light dusting, the Snow Center is activated, and the District heavy and light plows and major contractors are mobilized. Once the storm ends, salting will be completed in four hours on major roads, the eight "major contractor" highways, and the problem streets. For problem alleys, salting is completed in six hours; on the remaining residential streets, salting should be complete in eight hours.

The DC Snow Team deploys quality assurance teams at the end of each shift. In a light dusting condition, bus, trash, and recycling operations are at near normal service; the contract plows are not mobilized.

Trash collections are suspended until streets are passable. Residents should put new waste out at the curb but not move containers of old waste from alleys. Waste in alleys will be collected as soon as conditions permit. Bus service may be delayed.

Property owners are responsible for clearing snow and ice from sidewalks abutting their property.